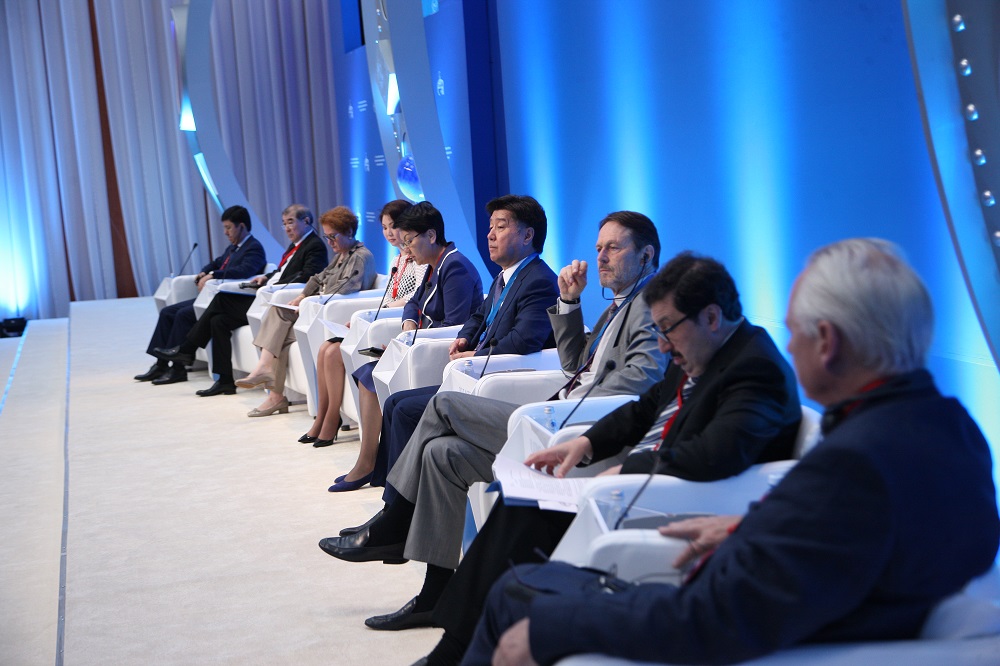 The conference entitled "Management of Opportunities: Global Challenges of Leadership" was held in Astana at the Astana Economic Forum organized by the Academy of Public Administration under the President of the Republic of Kazakhstan jointly with the Agency of the Republic of Kazakhstan for Civil Service Affairs and Anti-Corruption and the Regional Hub of Civil Service in Astana.

The conference was attended by the representatives of Kazakhstan central government agencies, international and various non-governmental organizations, academies and universities, experts from the EU and EurAsEC countries, the Asian Development Bank, the Organization for Economic Cooperation and Development (OECD), the Hub’s participating countries, and Kazakhstani practitioners and scientists.

Ms. Aigul Shaimova, Deputy Chairman of the Agency for Civil Service Affairs and Anti-Corruption, Ms. Cihan Sultanoglu, Assistant Secretary-General, Assistant Administrator and Director of the Regional Bureau for Europe and the Commonwealth of Independent States of the UNDP and Mr. Alikhan Baimenov, Chairman of the Steering Committee of the Regional Hub of Civil Service in Astana.

In her speech, Ms. Cihan Sultanoglu, UN Assistant Secretary-General noted the effectiveness of the Hub's activity as a platform for cooperation in the sphere of civil service. "The Regional Hub, being a joint initiative of the government of Kazakhstan and UNDP, represents an example of innovative development that accumulates the best practices in the field of civil service reforms and disseminates them among its participating countries," Ms. Cihan Sultanoglu said. She also stressed that the Hub is becoming an excellent network platform for creating various types of partnerships in civil service.

Mr. Alikhan Baimenov, Chairman of the Steering Committee of the Hub noted that “in today's interdependent world, it is very important that leaders measure their decisions for organizations and systems at different levels against the common goals and objectives of higher-order systems. The adoption of the Sustainable Development Goals is not only the result of recognizing this, but also a call to action in this direction."

In addition, he emphasized that «globalization, development of information and communication technologies in a changing world is becoming a challenge to leadership in many directions. Citizen become better informed about solutions in other countries. They compare and assess performance of their state bodies against certain benchmarks, leading to the rise of their expectations. In fact, state bodies start functioning in a quasi-competitive environment". "All this creates not only new challenges, but also new opportunities for leadership," Mr. Alikhan Baimenov said.

The purpose of the conference was to search for a model of responsible leadership capable of ensuring the sustainable development of humanity. The speakers discussed how managed forecasting is turning into an important instrument for the development of states in the current unstable time.

Mr. Alikhan Baimenov, Chairman of the Steering Committee of the Regional Hub of Civil Service, met with Mr. Vladimir Mau, Rector of the Russian Academy of National Economy and Public Administration under the President of the Russian Federation, Hanimund Fletcher, International Development Director of US Federal leadership Institute, Mr. Hiroshi Tanaka, Professor, former President of Project Management Association of Japan and Mr. Gor Lans Lyanping, Senior researcher, Professor at the East Asian Institute of the National University of Singapore (Singapore). The parties discussed prospects for development of cooperation and implementation of joint initiatives to improve the civil service.