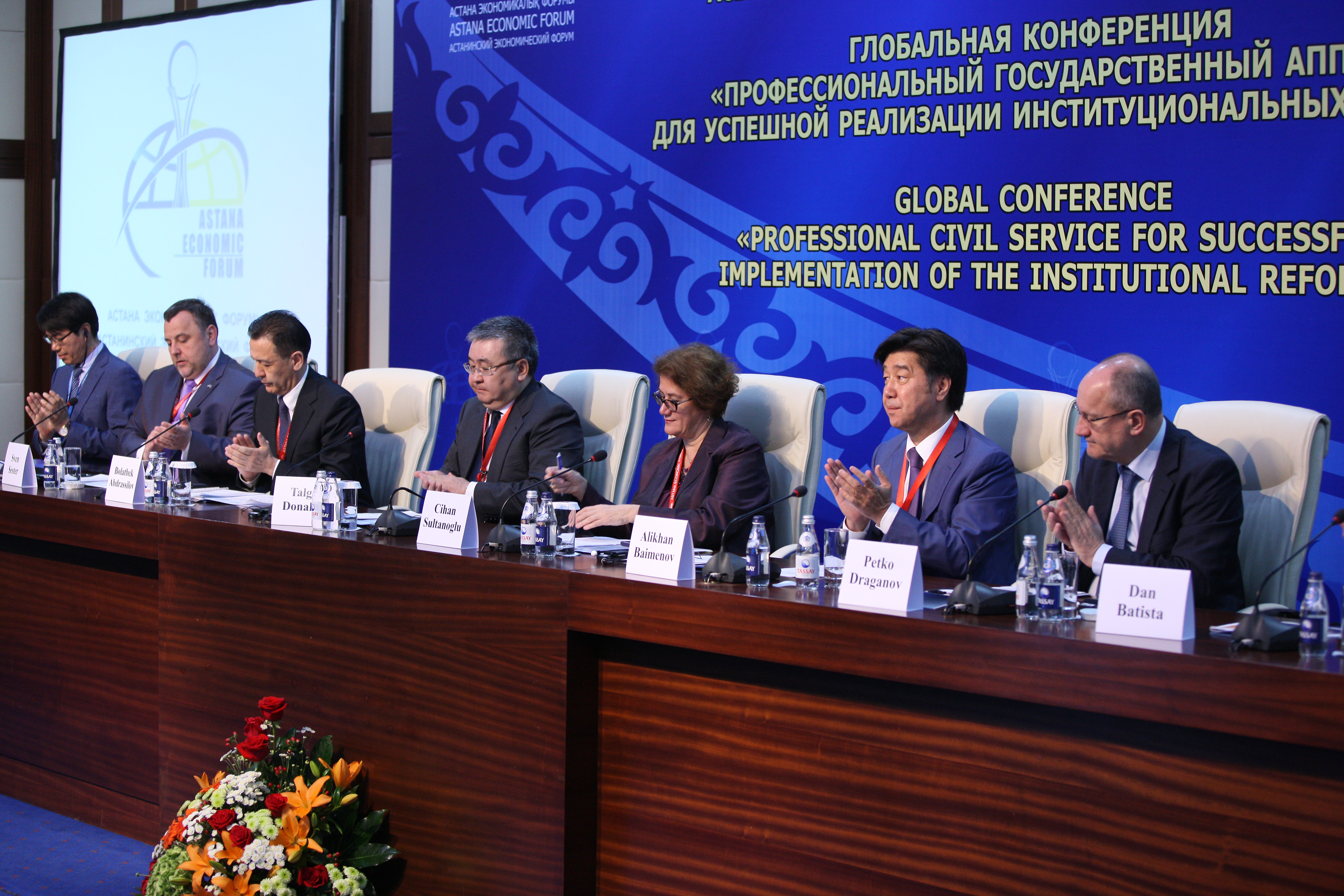 Minister of Civil Service Affairs of the Republic of Kazakhstan Mr. Talgat Donakov, Assistant Secretary-General of the UN, Assistant Administrator of the UN Development Programme (UNDP) and Director of the Regional Bureau for Europe and the CIS Ms. Cihan Sultanoglu, Chairman of the Steering Committee of the Regional Hub of Civil Service in Astana Mr. Alikhan Baimenov and Rector of the Academy of Public Administration under the President of the Republic of Kazakhstan Mr. Bolatbek Abdrassilov gave a welcoming address to the delegates.

Chairman of the Steering Committee of the Regional Hub of Civil Service in Astana Alikhan Baimenov, referring to the institutional and long-term sustainable development, said that the competitiveness of countries, to the large extent, determined by two important factors: the quality of human resources and the quality of systems, which create conditions for realizing full human potential. And public administration plays a key role in the creation of such systems, he emphasized.

Well-known scientists, the world's leading experts and politicians gave a talk during the conference. Among them, Minister of Finance of the Republic of Estonia Sven Sester, Head of the UN Regional Centre for Preventive Diplomacy for Central Asia Petko Draganov, Rector of the Academy of Public Administration under the President of the Republic of Kazakhstan Bolatbek Abdrassilov, President of the National Human Resource Development Institute of the Republic of Korea Oak Dong-suk, Executive Director of the Institute for Citizen-Centred Service of Canada Dan Batista, Chief Executive Officer of the Dutch Institute for Public Administration Leo Smits and others.

There were discussed modern trends and international best practices for improving the civil service system, issues of good public administration, development of preventive diplomacy and improvement of the public services quality, innovation in training civil servants and conducting research projects in the field of public administration, both in Kazakhstan and abroad.

About 20 leading international experts and specialists from the United Kingdom, France, Germany, Canada, Estonia, Netherlands, Russia, South Korea, Azerbaijan, Tajikistan, Kyrgyz Republic and other countries actively participated in the discussion of topical issues within the theme of the conference.

The conference gathered the heads of the authorized bodies in the sphere of civil service, representatives of international and non-governmental organizations, academies, schools and institutes for training of civil servants from EU and CIS, participating countries of the Regional Hub of Civil Service in Astana, as well as prominent Kazakhstani practitioners and scientists in this field.